Vitamin K is a lipid-soluble vitamin that is known and vital for helping blood clotting and keeping bones strong. It is fundamental in the human organism for several other reasons. 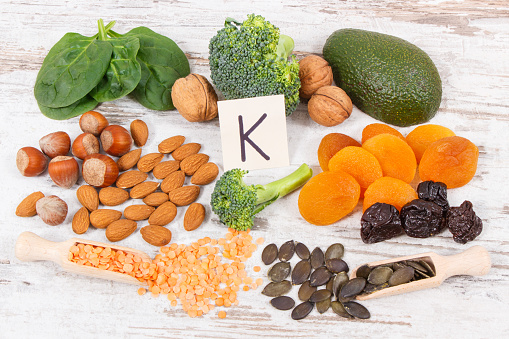 As one of the benefits of vitamin K is healthy blood clotting, it works for example in the healing of a wound and

prevents excessive bleeding. Also, in the case of bones, vitamin K helps to reduce the risk of bone fractures.

There is also evidence that this vitamin also helps to prevent arterial calcification.

Vitamin K deficiency can occur at any age, however, it is found most often in children, who must be treated with care.

Vitamin K can be found in three types, including:

Symptoms of lack of vitamin K

Vitamin K deficiency in the body is difficult to happen, because it is present in many foods such as vegetables

and some spices. Also, as seen earlier, bacteria in the gut naturally and on their own produce vitamin K; because

of that, unlike other vitamins, it is hardly used in food supplements.

Even though it is rare, there are cases of vitamin K deficiency, and the symptoms are:

through the mother’s placenta or breast milk. If there is no application of vitamin K in the newborn administered

soon after birth, there may be a risk of bleeding due to vitamin deficiency.

This bleeding, also known as newborn hemorrhagic disease, is associated with more severe cases such as

The application is necessary as a preventive measure and it may be necessary to apply it for a few days after birth,

until the child creates bacteria that carry out the production of the vitamin in the body on their own.

Causes of lack of vitamin K

Because vitamin K is naturally produced by bacteria in the intestine, when a person needs to take antibiotics for

some reason it ends up killing bacteria (both good and bad), putting the individual at risk for vitamin K deficiency

(due to the destruction of the bacteria ).

Other causes can also be found if you:

If you fit these last cases, consult a doctor and consider taking supplements rich in vitamin K.

How to Replace Vitamin K

Below you will find the exact amount of vitamin K needed daily. The replacement of lack of vitamin K

can be done only with food, only in particular cases you can add supplements (as seen above):

No side effects were found from high intakes of vitamin K from foods and supplements. However, this

does not exclude the fact that a person experiences secondary side effects. Follow the recommended dos

See below for foods that are sources of vitamin K :

As many foods have vitamin K in their composition and the intestine produces it, there is almost

no need to ingest a supplement with this vitamin. However, keep to a balanced diet often, and if you

feel you need food supplements and multivitamins, talk to your doctor.

As seen above, it is difficult to find cases of lack of vitamin K in the body, so if you are taking

any type of daily medication or experience different symptoms, consult a doctor, do tests and see

what is the best option for your case. Another essential tip is to always maintain a balanced diet.