B-complex vitamins are a group of water-soluble vitamins that participate in various chemical reactions in the body. Vitamin B1 is part of this group, which is also known as thiamine. 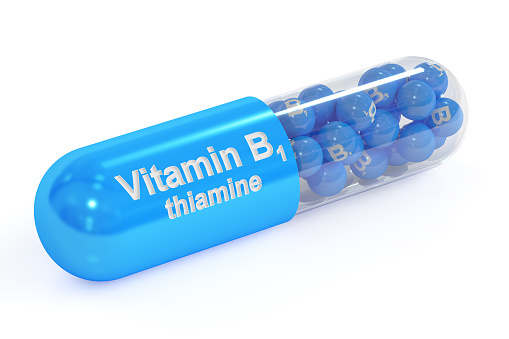 Among the benefits of vitamin B1 and its functions in the body, it is responsible for helping cells transform

energy for the body, especially the brain and nervous system.

Vitamin B1, which is also classified as a coenzyme, participates in muscle contraction and the conduction of nerve

signals and is used to maintain proper function of nerves and heart.

Alongside the other B-complex vitamins, vitamin B1 works on regulating important functions of the cardiovascular

system, the endocrine system and the digestive system.

out as sources of nutrient in the diet.

The lack of vitamin B1

Thiamine deficiency or lack of vitamin B1 is not very common to be found in Western and developed countries. However,

this does not mean that it does not exist.

For example, it can be developed when a person fails to provide the amount of vitamin B1 that their body

The following list, based on data from the Office of Dietary Supplements of The National Institutes of Health of

the United States, presents the recommended daily amount of the nutrient for different groups of people:

Boys and girls from birth to six months of age: 0.2 mg of vitamin B1 per day;

Boys and girls from one to three years of age: 0.5 mg of vitamin B1 per day;

Boys and girls from four to eight years of age: 0.6 mg of vitamin B1 per day;

Female adolescents aged 14 to 19 years who are pregnant or nursing: 1.4 mg vitamin B1 per day;

There is also a condition called Wernicke-Korsakoff syndrome, which is also known as the lack of vitamin

Most alcoholic drinks with the disease report not consuming many foods, while drinking too much alcohol,

which is a factor that contributes greatly to the lack of vitamin B1.

and by those suffering from liver problems.

In addition, the tannins present in coffee and teas can react with vitamin B1, causing it to gain a form that is

difficult to be properly absorbed by the body, causing the risk of developing digestive problems and thiamine deficiency.

However, most researchers believe this should not be a cause for concern unless the diet is low in vitamin B1

and vitamin C. Vitamin C appears to prevent interaction between thiamine and tannins in coffee and teas.

Research has also pointed out that freshwater raw fish and shellfish may contain chemicals that destroy vitamin B1.

This has been observed in people who consume a lot of raw fish, however, cooked fish and seafood do not cause

There are also studies that have indicated that so-called areca nuts can chemically modify vitamin B1, making

it not work as it should.

Lack of vitamin B1 can cause weakness, chronic fatigue, cardiac complications, psychosis, nerve damage and a disorder

known as beriberi, in which muscle wear and severe cardiovascular problems such as dilated heart (cardiomegaly) occur.

Symptoms of lack of vitamin B1

The list of symptoms of lack of vitamin B1 includes:

you suffer from vitamin deficiency or not. And there is no other way: to make sure that is the case, you need to

consult with the doctor, who will examine you, hear the symptoms you present and make the diagnosis.

Once the diagnosis is confirmed, the doctor will indicate the appropriate treatment, specifying whether the problem

can be reversed only with increased intake of foods with vitamin B1 or if there is a need to use supplements.

that the origin of the lack of vitamin B1 is investigated, discovered and treated and to verify that the deficiency

of the nutrient has not caused some other type of problem. health.

As with all nutrients, it’s best to try to provide them with food rather than supplements whenever possible.

If you think you have a nutrient deficiency, before the day of your appointment, what you can try is to eat more

foods that serves as a source of thiamine in your meals.

product is really suitable for you, if it cannot harm you or if it cannot interact with any medication, supplement or

medicinal plant that you use.

In addition, the dosage of a supplement must be defined by the physician according to the characteristics and

needs of each patient. This is necessary in order not to end up with excessive doses of thiamine in the body or use

a dose that is ineffective to treat the lack of vitamin B1.

According to doctor of molecular biology Matthew Busse, vitamin B1 overdose is rare, but excessive intake

of thiamine can cause stomach upset.

According to Busse, ingesting too much of just one B-complex vitamin, such as thiamine, can cause an imbalance

“In rare cases, vitamin B1 supplements can trigger an allergic reaction. The most common symptom is skin irritation,

resulting in dryness, itchy skin or rash,” added the doctor of molecular biology.

According to Busse, a more severe reaction with nausea, dizziness, difficulty breathing and swelling of the hands, face,

mouth or throat can also occur, although this is rare.

“If you or someone you know experiences severe swelling of the face and has difficulty breathing, contact the emergency

In view of any side effects resulting from the use of a vitamin B1 supplement, we recommend that you seek medical

help to check the seriousness of the problem and verify that it does not require treatment.

This article is for information only and can never replace a physician’s diagnosis and advice. To diagnose and treat

vitamin B1 deficiency, you need to see your doctor.